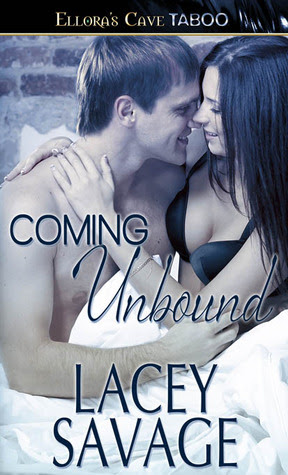 Ginny and Cole have struggled to connect intimately since before their marriage. When Cole suggests they surprise each other with the most sexually daring things they can dream up for their anniversary, Ginny reluctantly musters every ounce of courage she possesses to get nipple piercings.Cole’s surprise?He’s turned their suburban basement into a dungeon—and hired a sexy Dom to teach them the art of BDSM.Desperately in love with his wife, Cole’s aware of sensitive sexual demons in Ginny’s past, and will try anything to beat them. Whips, toys, ménage play with the Dom…all these and more could help Ginny find pleasure, break through her issues.Or, if they’re not careful, possibly just break Ginny.

Stories about couples going through marital difficulties are a favorite of mine. Let's face it. Sometimes things can get a bit staid after a few years together and it takes some flash to get things roaring again. Ginny and Cole are facing this issue in their marriage in this book. Ginny has not been able to orgasm and it is causing a huge strain on the marriage. Most of it stems from events in her past. She was made to feel that her love of pain was disgusting and she was a bad person because of it. (Okay, that just made me mad and I totally felt for her.) After a horrible non-encounter, Ginny goes on a business trip and decides she has to do something to spice things up. She buys books, sexy clothes and (gasp) gets her nipples pierced. *insert toe curling moment* As she is on the table getting worked on, the pain makes her orgasm in a way her husband has not been able to make her do. She is totally torn about what to do.

Cole has been a busy boy while she has been away and when Ginny returns from her trip, he has a little surprise of his own waiting. Erik is a Dom and he helps her to realize some very key things about herself. It is up to her whether she will become unbound from the shackles of her own mind, or allow them to dictate her relationship with her husband.

A great read! One that left me wanting more...