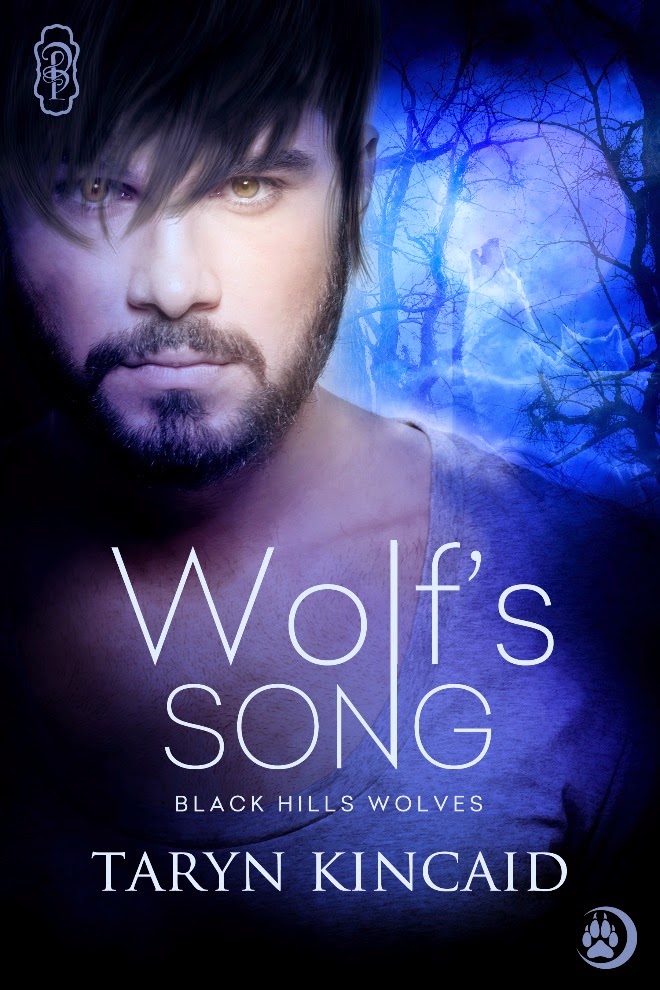 BLURB:
Ten years ago, visions of death and the babble of lupine voices in his head, drove lone wolf Brick Northridge to challenge his cruel and greedy pack alpha. Beaten by the alpha’s thugs and banished from the pack, Brick lives a life of seclusion in a mountain cabin in the Black Hills.
Born into a rival clan of feline shifters, skinwalker Summer McCoy, in her guise as a raven, watches Brick from afar, giving him back a reason to live through her sweet songs and special gifts.
But when her clan attempts to tear them apart and threatens the pack that banished Brick so many years before, will their love be strong enough to withstand the forces bent on their destruction?

EXCERPT 2:
She did not move, except to lower her raised arm from its frozen position. “Why do you call me that…? Annabel Lee?”
“I don’t have another name.”
“Summer,” she said. “I’m Summer.”
Yeah. Def. When the berries plumped sweetest. “Suits you.” His raging arousal made the words hoarse and jagged. Too harsh for this gentle female. “Turn,” he murmured. “I want to see your face.” A low growl escaped him before he could bite it back. “Your breasts.”
She turned then, slowly through the water, rounding to face him.
He sucked in his breath, his heart slamming against his chest. She was stunning and glorious. The beads of water rolling down her golden body sparkled in the sun. She glistened. All natural. No makeup. No artifice. Everything a female should be. And more. Much more.
Another pheromone cloud engulfed him. Her eyes went large and rounded, as if she guessed she’d zapped him with her hormonal lures, but couldn’t help emitting her sex juice any more than he could. Her nose twitched and she sighed, as if enveloped in a vat of melted chocolate, or whatever the fuck his own mating scent smelled like. He could only hope he gave off an aroma as rich and delicious as she did.
He struggled to control the raw savagery of his attraction and had to tear his eyes from her face. But her breasts…God, her breasts. Full and high, the exact size to fill his large hands, rose tips jutting toward him. He remembered how she’d touched herself, how much he’d wanted to replace her hands with his. Hell. He wanted to bury his face between those breasts, lapping at her, licking and sucking, take each one into his mouth, between his lips, grazing the pointed nipples with his teeth until he tore moans of delight from her.
His throat closed, his tongue swelling, filling his suddenly dry mouth, cutting off his ability to utter either animal sounds or inane words. After a beat or two of silence, she glanced away.
“What do you think?” Not shy exactly. Expectant. An undercurrent of doubt laced her question, as if she could not bear to disappoint him, and did not know what to make of his continued speechlessness.
“Perfect.” He rubbed his eyes. “Ah, Christ. You’re perfect.”
“No, I’m not.”
“You are to me.”
Amazon: US | Canada|  UK | Australia  |
Barnes and Noble | Kobo | iBooks | Decadent | ARe |  CoffeeTimeRomance |
AUTHOR BIO:
Taryn Kincaid reads the back of cereal boxes and everything else that stands in her way. She writes HOT and sweet paranormal, historical romance and contemporary romance, sometimes spiced with a little humor or a lot of snark. She enjoys pinching and tickling words until they scream.

Her latest, WOLF's SONG, a shifter romance that is part of Decadent Publishing's new Black Hills Wolves line was released in January. IF YOU CAN'T STAND THE HEAT, a contemporary foodie romance for Fated Desires Publishing's new special line, "Give Me a Taste" releases 2/24/15 but is available for Pre-Order now!

Coming soon...RAIN, a Beyond Fairytales story for Decadent Publishing; and HER CAPTAIN, a Tempting Signs story for Fated Desires, coming in December, 2015.