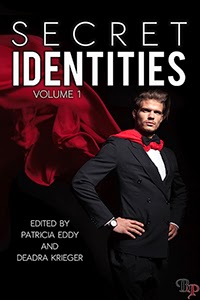 Ever wonder what it’s like to fall in love with a caped crusader? Or perhaps you would rather be a damsel who loves to fall into the wrong hands? Breathless Press presents seven sultry tales of adventure filled with superpowers that would make any pants quiver with excitement. Face foes who are too hot to resist, and find love on the wrong side of the spectrum. These dashingly dangerous authors will have you thirsty for more:
Brantwijn Serrah
Jen Bradlee
Winter Bayne
McKayla Schutt
Ivy Bateman
Find out what’s under the cape...
eBook Buy Link
http://www.breathlesspress.com/index.php?main_page=product_free_shipping_info&cPath=6&products_id=731&zenid=97d3ec0ad070c690f56ad79c09251d4b

Right Where I Want You by Brantwijn Serrah
Clarion City's Midnight Defender finds himself in the clutches of his arch-rival, the sultry villainess codenamed The Mink. She'll give him the chance to win back his freedom...but only if he gives her everything she wants.

Manipulator by Jen Bradlee
Manipulation has always come second nature to Addison, but an unexpected ally takes the time to show her where her true value lies.

Heroes for Hire: Striker by Winter Bayne
Shade is an average woman until the government changes her with superhuman powers. Striker is ex-military who sees the benefit of altered humans and turns his vision into a business, Heroes for Hire. On opposing sides, passions flare for them leaving one unanswered question—how good can sex get?

Hear the Heat by McKayla Schutt
Being a mind reader, Kelly struggles to find the perfect man as she puts criminals in jail. At a speed dating night she meets the sexy detective Brad in Richmond, VA. Find out if they can make it past the one night.

Edged in Flame by Ivy Bateman
"You and I can light up the world together."
Ever since Lizzy first slipped into her super suit, she's longed to hear words such the perfect hot partner. But now that it's happened, have they been said by the right man?

Playing Hard to Get by Brantwijn Serrah
Brooke doesn't really play well with others, and she wants nothing to do with an organization out to recruit "talent" like her. It's a little tough to refuse, though, when they send a recruiter with some very special talents of his own...

Bound in Memories by Jen Bradlee
Adele realizes too late that behind the façade of the perfect gentleman who saved her from prison beats the heart of a ruthless villain.