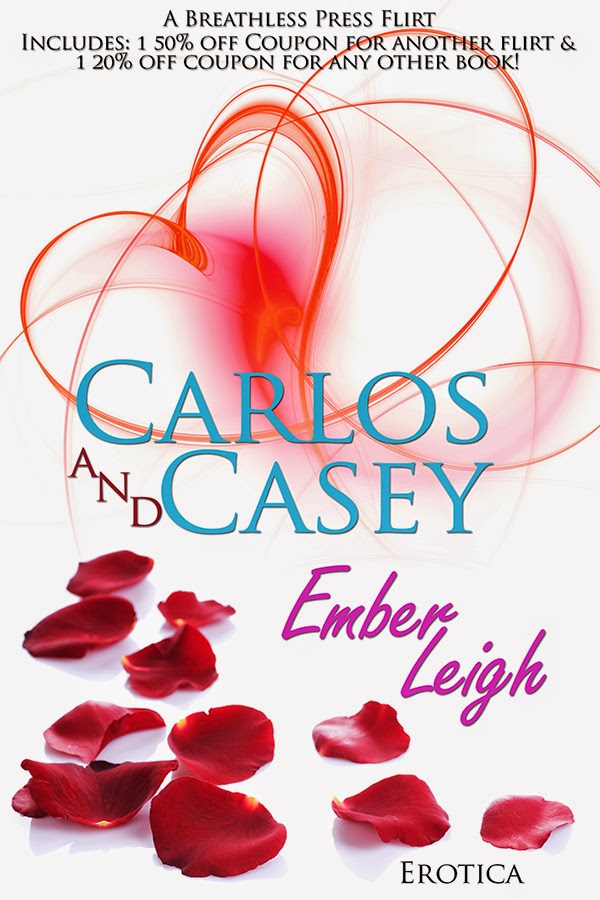 Casey hasn't seen Carlos in four years, but a business trip brings the ex-lovers together, making them question whether the spark is still really there.
Blurb: Recently divorced, Casey has been longing for a man's touch. So when business brings her back to Carlos, the one that got away, it has to be fate. The four years apart have only done him better, and all she can think about is having his arms, and body, wrapped around hers. But Carlos is not the same man he was four years ago, and Casey too is feeling the weight of too much time gone by. Can Casey help reignite his fire or has time left them behind?

Buy Link
http://www.breathlesspress.com/index.php?main_page=product_free_shipping_info&cPath=9&products_id=630&zenid=b7286dccf26ba7606bb086e744f36146
EXCERPT:
Her breath caught as she followed him up the staircase, tucked to the far side of the house. Carlos had always been fit enough, but it looked like he'd taken up some new form of exercise in the past four years. He was beefier, yet still lean. His ass moved round and tight in front of her as they climbed the stairs. At the landing, he gestured in front of them.

"This is my studio, but it's all yours for tonight."

It was a rec room that took up the whole second floor, and far more standard male than the ground floor alluded to. Movie posters, gaming systems, books scattered on floors and coffee tables, and, off to one side, the trumpet, asleep in a bed of sheet music. In the corner there was an overstuffed couch just about as wide as she was long – it would be great to sleep on, even better if he could bend her over that armrest and fuck her until dinner was ready.

She cleared her throat, deciding adult friendships could be fun, even after four questionable years. "I thought I'd be sharing a bed with you?" She tried to keep her tone playful as she sauntered toward the couch. She tossed him a smile and she caught a glimpse of him looking very stricken. Shit. Too far. Things are too different now. Abort!

Maybe too much time had passed in general. Maybe he was courting a girl and wanted to take it slow with her. Maybe he no longer found her attractive, four years becoming the dagger in the heart. Maybe he'd become celibate, or found her life too normal and boring. There was a whole list of reasons why she shouldn't make the first move.

"I was just joking," she said after a moment, rolling her eyes. "Come on, lighten up."

He exhaled slowly, looking down at the ground as his tongue found the corner of his mouth. "I know it was a joke, Case."

"In case you forgot, we used to share a bed." She looked at him pointedly, already horrified that the words were coming from her lips. What was the getting at? Who had authorized this dialogue?

He squeezed his eyes shut and laughed softly. "Oh, I remember."