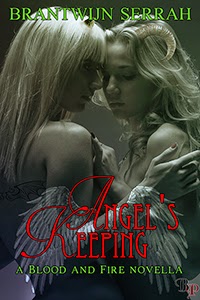 Welcome again to a second edition of Breathless Monday. We have a new spicy f/f story from Brantwijn Serrah and I can't wait to read it!


1. How did you start writing erotic romance?
I read too many erotic romance novels that ended up disappointing me. It already seems like romance and erotica aren't taken very seriously as literary genres... and the authors of these novels weren't taking their work seriously either. I wanted to write something that was not only erotic and emotional, but had a strong story and solid plot as well.  As I wrote my first erotic novel, Lotus Petals, I discovered I really enjoyed the freedom and creative potential of writing erotic stories.
2. Plotter or pantster?
I plot, mostly, though I don't like to use outlines or other more 'structured' methods.  Most of my scenes come to me in little nuggets, and I sort of 'massage' them into a plot.  For example, while I was looking through stock imagery to use for my Goblin Fires book trailer, I saw that the model I used for Finn—Reagan's half-brother—also modeled in an image of a man with the body of a snake. It put one of those little nuggets in my head, and so when I write Finn's story, things might get a bit... snaky.
3. What are three things you have on your writing desk?
My iPod and my Kindle are always nearby lately, as they've become very integral tools for me: I have writing prompt apps, email notifications and journaling ideas on them, as well as access to all my social networks so I can have work on one screen, Twitter on another, and check my email with a third. So I multitask a lot, using these devices. I always have a steno notebook nearby as well, as from time to time when I'm not at home, I'm making hand-written notes in them, then transcribing when I'm in front of my computer.
4. Favorite food?
I love Macaroni and Cheese, especially if it's sharp cheese or white cheddar.
5. Tell us a little about your new release. What character in the book really spoke to you?
Angel's Keeping is a short novella in the same series as my first book, Lotus Petals. The story features a different cast of characters, however: while Lotus Petals follows the story of a vampire warrior, Angel's Keeping brings readers into the present, and introduces them to the incubi and succubae families. Two of the characters—Raschael and Malael—have appeared in my short stories before, but this is the first significant story about their side of the demonic street in my Blood and Fire series. Oddly enough, it was a supporting character—the stripper, Noelle—who spoke to me most. She was very fun to write and I enjoyed her teasing and banter.
6. I write because I have stories to share, and my biggest dream is to know others might enjoy hearing them as much as I enjoy telling them.
7. What is your favorite type of character to write about?
I'm usually a big fan of powerful women with a "weak spot", something making them vulnerable beneath their tough exterior. My vampire, Rhiannon; my fae Knight, Reagan; and my new leading lady, Sadira, all fall under this archetype, although in different ways. In Angel's Keeping, though, I got to write a little bit from a very opposite archetype: the succubus, Kyriel, is the absolute wrong kind of demon, in Blood and Fire: she is soft, tender, and sweet. Writing a character with such an open and fresh vulnerability was a really beautiful feeling.
8. What is the sexiest scene you ever wrote?
For this year's National Novel Writing Month, I've been pursuing a story about a BDSM Master/slave power exchange relationship. I've clocked a lot of mileage in bondage scenes as a result, and I have to say lately these are the scenes really getting steamy. In the meantime I'm writing the sequel to Goblin Fires, which involves the character of Finn and his two Ladies, Nineva and Nerissa, which features a lot of threesome scenes, including one in a hot tub.
9. What advice would you give new authors in the erotica/romance field?
Don't limit yourself to stories reflecting your own fantasies or lifestyle. Be open to possibility of writing a something new and different, something you haven't experienced and maybe never even considered. Do some research, talk to people 'in the lifestyle' (whatever that lifestyle might be). For years, I wanted to write a story about a polyamorous trio, a concept I thought of as 'a perfect love triangle'. I'm not poly myself and have never really felt the desire to explore the lifestyle in my own relationship, but I knew there could be a really wonderful story there, if I took the time to learn, ask questions, and discover new things.
10. What is next on your writerly horizon?
As usual I have a lot of projects in the works. As I mentioned I've been working for a story about a deep Master/slave, BDSM relationship, for National Novel Writing Month. In addition to that, the sequel to Lotus Petals is in its first edits. Once NaNo is over, I've got Finn's story to work on (and I've been looking forward to getting into my half-elf male's head).

Author bio-
.
When she isn't visiting the worlds of immortals, demons, dragons and goblins, Brantwijn fills her time with artistic endeavors: sketching, painting, customizing My Little Ponies and sewing plushies for friends. She can't handle coffee unless there's enough cream and sugar to make it a milkshake, but try and sweeten her tea and she will never forgive you. She moonlights as a futon for four lazy cats, loves tabletop role-play games, and can spend hours watching Futurama, Claymore or Buffy the Vampire Slayer while she writes or draws.
In addition to her novels, Brantwijn has had several stories published in anthologies by Breathless Press, including the 2013 Crimson Anthology and 2014 Ravaged Anthology.  She's also had a short story published in the Cleiss Press Big Book of Orgasm and the anthology Coming Together Through The Storm. She hopes to have several more tales to tell as time goes on.  She has author pages on GoodReads and Amazon, and loves to see reader comments on her work. Her short stories occasionally pop up at Foreplay and Fangs, her blog at http://brantwijn.blogspot.com.

As a succubus, preying on humans is Raschael's business, and mortal holidays are a frivolous waste of time. So maybe her king meant to punish her when he sent her out to hunt on Christmas Eve. Or maybe he just wanted her far, far away, so he could banish Raschael's one trusted friend.
Now Raschael must track down a missing fallen angel, and she doesn't have a clue where to start. Bigger predators are closing in, and Rasche's only lead is a Christmas stripper named Noelle.

Book excerpt-
The waitress ditched her tray of drinks and took Rasche by the hand, leading her into one of the back rooms. The Christmas theme survived even in the private show quarters, though with a more generous degree of triple-X action. The small space Raschael's escort chose had been decorated with garlands and wreaths, and a stocking hung by the door, but on top of the holiday trimmings there were also striking boudoir pictures. They all contained the same sweet, golden angel, but in much less "angelic" form.
Raschael spun to address the woman personally. "Who are you?"
By way of answer, the woman nodded her head at the bright red stocking. Noelle, it read in sapphire blue, glittery letters across the trim.
"Noelle?" Rasche asked. "Really?"
"Yes, really," Noelle replied with a brilliant smile. "It really is my God-given name. Honest."
"All right, Noelle, then about Kyrie-"
"Oh, now, now."
Noelle took Rasche's hand again, stroking her fingers, and led her to the soft red leather seat stationed in the center of the room. She gestured for Raschael to sit and, before Raschael could stop her, climbed expertly up into the succubae's lap.
"First thing's first, gorgeous. How about we get a little more...intimate?"
She raised a hand and snapped her fingers. The faded strains of Blink 182 from the main room became inaudible, as Lady Gaga's "Speechless" flowed into the room's own speakers. Noelle lowered herself over Raschael's body, rocking in time with the sultry piano, wrapping arms around the fallen one's neck.
Forgetting herself for the briefest of moments, Raschael closed her eyes and let the first swell of carnal desire stir to life in her loins and chest. The dancer didn't stop her when she lifted up her hands and cupped them over warm, soft buttocks.
Noelle smelled of warm vanilla. She had a luscious body, petite with classic curves, Renaissance in a way...but with eyes closed, Raschael's mind made her Kyriel, little and lithe and naughty. Under her hands, Noelle's plump hindquarters might have been Kyrie's slim, boyish ass instead, and the sweet scent of heather rose up with the remembered sounds of Kyrie's intoxicated desire, from earlier in the evening. Rasche lowered her face to nuzzle against a plentiful swell of tender breasts, and she sighed before she could stop herself, moving her body against the other woman's with yearning.
"Why don't you tell me about your friend," Noelle whispered against her ear, gyrating ever-so-delightfully against Raschael's body. "Why are you out searching for her on Christmas Eve, hm?"
"She ran away," Raschael said. Her palms caressed the dancer's ass greedily. "And I'm responsible for bringing her back before she gets in trouble."
Noelle tsk'd her. "Now, now, Raschael. You make her out to be some sort of bad puppy."
The dancer extended a leg and swung herself neatly around, facing away now to grind her pert little rear down on the succubae's lap instead. Noelle's hands stole to hers and guided them up to stroke tits through gauzy white fabric. Raschael's fingertips found stiffened nipples, and she teased them through the thin material.
"Who told you my name?" she asked. "Kyrie?"
"Mm, could be..."
Noelle's hands closed, warm, over Rasche's own, as the dancer welcomed her to knead, stroke, and caress. Rasche inclined her head to breathe in deep, relishing the scent of beautiful blonde hair.
"Listen, honey," she whispered. "I'm sure as hell enjoying this, and if I had the time to spare I'd be all over you in ways you can't even conceive."
"Mm-hm," Noelle replied. Her hips rolled in languid, mesmerizing rhythm, and Rasche let out a little growl as she returned the motion in kind.
"Oh, sweetness, I'd fuck you until you couldn't stand," she said. "But not now. You're going to tell me if you've seen my girl, and where she is, and then we'll see about making it up to you. Sound good?"