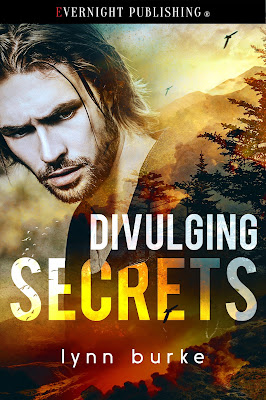 
Publisher: Evernight Publishing
Art Work: Jay Aheer, Simply Defined Art
Keywords: Romance, Contemporary, Suspense
Candace Lake's testimony against her father landed her in the Witness Protection program. With a new identity comes a new beginning, one based on lies and loneliness. How can she find someone to share her future with when a relationship without trust at its foundation won’t stand the storms of life?

Tom Berkley didn’t expect his new tenant to make him question his solitary lifestyle in the backwoods of Maine. He also didn’t expect to be caught up in the secrets of her past that bring his own tragic ones to the forefront of his mind.
The sizzling chemistry between them can’t be ignored, but when the threats from Candace's turbulent past catch up with her, can she trust Tom enough to protect her from the price on her head?
BUY IT ON SALE NOW FOR ONLY $2.99 AT EVERNIGHT PUBLISHING!
Evernight Publishing: http://www.evernightpublishing.com/divulging-secrets-by-lynn-burke/
OTHER RETAILERS:
Amazon: www.amazon.com/dp/B07B4HHWM6 Amazon UK: www.amazon.co.uk/dp/B07B4HHWM6 Smashwords: www.smashwords.com/books/view/797332 B&N: https://www.barnesandnoble.com/w/books/1128078387 Kobo: www.kobo.com/us/en/ebook/divulging-secrets
EXCERPT:
I followed the two marshals carrying the four suitcases I’d been allowed to pack. Nothing personal, no documents. No electronics. I had been forced to leave behind Butter, my old tabby that I had gotten for my tenth birthday. The locket my late mother had inscribed with my name and gifted to me on my sweet sixteenth birthday still lay inside its velvet box, left with one final longing, loving gaze, same as I’d done with her in a satin-lined coffin five years earlier. Boston’s spring air chilled me through as we stepped outside, and I gladly climbed into the dark-windowed sedan, wrapped my sweater tight around me, and allowed myself one last look at the condo Papa had bought for me. Papa. My throat thickened, and welling tears blurred my vision. I had unknowingly helped him smuggle millions of dollars’ worth of stolen gems and jewelry to and from overseas. I had knowingly helped put him behind bars in return for leniency in my own sentencing. But freedom had cost me my life. Everyone and everything I had known for twenty-five years lay in my past, and a new beginning loomed before me. Where, I had no clue—and I couldn’t bring myself to care. My luxurious condo … gone. My group of friends … gone. The gym I’d been going to for yoga classes since moving to Boston for college … gone. The diploma I had received from Harvard Law School with Lila Scorzoni written on it would never hang on my wall. I followed the marshals aboard a small, private jet inside a hangar at Boston’s Logan. Settling onto one of the seats, I tipped my head back and shut my eyes. The knot in my stomach had twisted months earlier when my lawyer suggested testifying against Papa to save my own ass. The nauseating twist had yet to relent, but at least I’d lost those damn freshman twenty I’d picked up over the years spent in college. The only good thing to come from the fucked-up situation that was my life. I heaved a sigh and turned my head, opening my eyes as the plane sped down the runway. We lifted into the air, leaving my home behind. Forever. Drawing easy breaths had proven difficult since finding out Papa wasn’t the successful business man—honest one—I’d always thought. His communications business at the office building downtown worked as a front for his shady dealings. The board of six who had helped to oversee said company, nothing more than a band of thieves. Witness protection. My mind chewed on the two words, but I wondered how protected I would be. Four of Papa’s associates were in the slammer, thanks to me, and two who had last been seen overseas—one in Rome, the other in Paris—still wandered free. Two men with the connections and motive to do away with me. Money at their disposal and without doubt, thugs or hitmen on their payroll. Where could the WITSEC plant me that would be safe from such men? Nowhere, I feared. 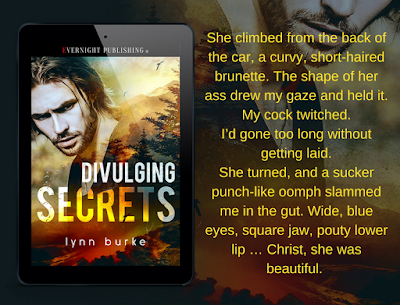 ABOUT LYNN BURKE:
Lynn Burke is a full time mother, voracious gardener, and scribbler of spicy romance stories. A country bumpkin turned Bay Stater, she enjoys her chowdah and Dunkin Donuts when not trying to escape the reality of city life.
Website: https://www.authorlynnburke.com/
Blog: http://authorlynnburke.blogspot.com/
Facebook: https://www.facebook.com/Author-Lynn-Burke-555282497937461/
Twitter: https://twitter.com/AuthorLynnBurke
Posted by Erzabet Bishop at 8:33 AM