**ONE DAY ONLY 0.99 SALE ON ALL BOOKS IN THE REBEL VAMPIRES’ SERIES*** @RosemaryAJohns 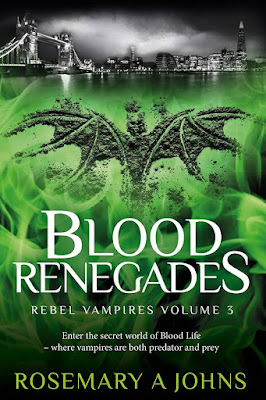 Light lives for his vampire family. Now he may die for it.

ESCAPE INTO AWARD-WINNING URBAN FANTASY… Light – rebel, lover, anti-hero – will be burnt at the stake in fourteen days. In a hidden, paranormal London, he’s been branded a traitor and terrorist Renegade – a Blood Lifer hunter of human slavers.

"Rosemary A Johns is one of fantasy's greats. She'll put you in mind of Anne Rice and leave you wanting more"- Gothic Mom's Reviews

Liberty is a relentless interrogator. She’s been trained to hate Renegades. Yet when her life converges with Light’s, she’s enticed by the dark and glory of his world.

Light is catapulted into a nightmare of secret research, deadly enemies and perilous intrigue. Soon he’s in a race against time to transform into the true leader vital to save his family, home and love. But will he be able to judge predator from prey?

Light must make the ultimate choice: to hide in the shadows. Or walk into the light…
Betrayal. Death. Hope. Isn’t that how all truly great stories start?

“Take what you know about vampire romance and throw it away. Rosemary A Johns is not only a refreshing new voice in this genre, she excels it. Her vampires are edgy and enticing” – Rockchick Addiction Reviews

**ONE DAY ONLY 0.99 SALE ON ALL BOOKS IN THE REBEL VAMPIRES’ SERIES***
This 29th April Escape into Blood Life…

Email ThisBlogThis!Share to TwitterShare to FacebookShare to Pinterest
Labels: **ONE DAY ONLY 0.99 SALE ON ALL BOOKS IN THE REBEL VAMPIRES’ SERIES*** @RosemaryAJohns