Nine of Stars Tour and Giveaway

Winter has always been a deadly season in Temperance, but this time, there’s more to fear than just the cold…

As the daughter of an alchemist, Petra Dee has faced all manner of occult horrors—especially since her arrival in the small town of Temperance, Wyoming. But she can’t explain the creature now stalking the backcountry of Yellowstone, butchering wolves and leaving only their skins behind in the snow. Rumors surface of the return of Skinflint Jack, a nineteenth-century wraith that kills in fulfillment of an ancient bargain.

The new sheriff in town, Owen Rutherford, isn’t helping matters. He’s a dangerously haunted man on the trail of both an unsolved case and a fresh kill—a bizarre murder leading him right to Petra’s partner Gabriel. And while Gabe once had little to fear from the mortal world, he’s all too human now. This time, when violence hits close to home, there are no magical solutions.

It’s up to Petra and her coyote sidekick Sig to get ahead of both Owen and the unnatural being hunting them all—before the trail turns deathly cold.

Laura Bickle grew up in rural Ohio, reading entirely too many comic books out loud to her favorite Wonder Woman doll. After graduating with an MA in Sociology-Criminology from Ohio State University and an MLIS in Library Science from the University of Wisconsin-Milwaukee, she patrolled the stacks at the public library and worked with data systems in criminal justice. She now dreams up stories about the monsters under the stairs. Her work has been included in the ALA’s Amelia Bloomer Project 2013 reading list and the State Library of Ohio’s Choose to Read Ohio reading list for 2015-2016. 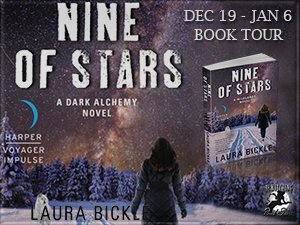 She dreamed of an ache in the marrow of her bones, so much deeper than frost.
In her dreams, Petra had dropped into Skinflint Jack’s hand-dug cellar, his underground ossuary. It was cold and silent there, and her breath made ghosts in the darkness. Light emanated from the bodies on the bed, from beneath their parchment-thin skin, moving like drifting fireflies underneath the surface. The bodies sat upright, heads turned toward her with empty gazes.
Petra would have run away, but she was pinned to the wall. Bones laced over her body like shackles, splitting through the skin of the dirt to wrap around her wrists, ribs, and legs. She tried to turn her head, but it was enclosed in a helmet, the Stag’s skull, and she blinked through the eye sockets of the Stag.
What had he seen? What had he done? She struggled against the weight of the bones, torn between wanting to know and wanting not to know.
Jack’s wife stood, walking across the floor to Petra in a dress of black lace. Bits of her skin fluttered to the floor, disturbed by Gabe’s autopsy efforts. In her hands, she held the Star of Antimony, gleaming in the shifting low light.
“What happened to you?” Petra asked, her tears blurring her gaze. The tears slid down her cheek, underneath the skull-mask.
The woman didn’t answer; only gazed at Petra with those empty, vacant eye sockets.


And Petra realized that her mouth had been sewn shut. 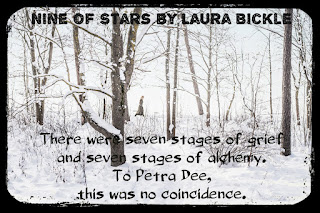 Wow. This book captivated me from the very first page. The author's use of language to paint a picture with words is truly astounding. I can't wait to read the rest of the series. Stellar character and a thrilling world that will leave you on pins and needles.


a Rafflecopter giveaway
Posted by Erzabet Bishop at 3:30 AM