All She Never Wanted 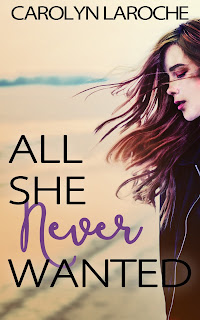 First, I would like to say thank you for inviting me to visit with your readers today. I am so excited to share my new novel All She Never Wanted  with you and your readers. It's an emotional, second chance love story that is very close to my heart. I love to read but romance is what I most enjoy. When I read, it is for escape. I want happy endings and if they happened to be a little spicy all the better. It was only natural, in my opinion, that I gravitate toward writing the sort of things I love reading.
2. Plotter or pantster?
I am a total pantster. No matter how much planning and outlining I do, it doesn’t matter. The characters do what they want and don’t care one bit what I think about it.
3. What are three things you have on your writing desk?
My writing desk doubles as the dining room table…currently it contains a blown glass pumpkin, a science project for my nine year old and a couple of bags of Halloween candy that the kids aren’t allowed to keep in their rooms.
4. Favorite food?
I pretty much love all comfort foods. Stews, casseroles, dishes with sauce and cheese and anything that even hints at being Mexican.  I am not all that picky.
5. Tell us a little about your new release. What character in the book really spoke to you?
All She Never Wanted  is a story about love, loss and loving again. Evie had everything she wanted and then it was all ripped away from her. She had to find a way to go on living and make a life for herself in a world that had left her broken and lost. Landon has his own baggage—and plenty of it—but together they slowly work through all the emotions and damage and begin to heal. Evie has to work so hard to come to terms with what has happened to her yet she never loses the best parts of her personality—her snark and her strength. Landon brings out the best in her, one moment at a time. Her happily ever after is hard fought and well earned.
6. I write because ____...
Writing is my escape from the daily stresses of life and the way I make sense of the world around me.
7. What is your favorite type of character to write about?
I love strong willed, determined women who go after what they want. My heroines also tend to be closer to forty than to twenty because I think those characters can be just as sexy and romantic with their husbands or a new love as someone younger.
8. What is the sexiest scene you ever wrote?
I’m not sure if it’s the sexiest but my favorite is an exchange between Cyndi and Jason in my book Undercover in Six Inch Stilettos where he runs through a list of things he would say to someone he arrests but puts a sexy spin them.  Loving a cop has its little quirks- the job tends to seep into every aspect of your lives, including the bedroom. There are lots of jokes about handcuffs and big guns and being under arrest that a non-cop relationship might never bring into a romantic situation. It definitely adds a little spice…

9. What advice would you give new authors in the erotica/romance field?
Do not ever feel embarrassed or ashamed by what you write. Be proud to be a part of a billion dollar industry that empowers women. I made the mistake in the beginning of not wanting to tell people my genre but let me tell you, I am over that. If you write things that people want to read and feel good about it then it doesn’t matter what genre it is. I read an article recently that called out romance writers as one of the last professions in the world that mentors the competition and supports each other’s successes to the very end. I am proud to be a part of that.
10. What is next on your writerly horizon?
The first book in my new Cape Cod Love Story series, Daisies in the Outfield, is releasing on February 21, 2017. It has all my favorite things—beaches, baseball and sexy firefighters.