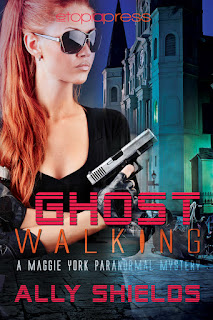 Not believing won't make the ghosts go away.

New Orleans' homicide cop Maggie York is at the top of her game until a sniper's bullet changes everything. She flatlines, comes back. But not quite the same. She sees and hears things...ghostly things. And she blurts out enough to her doctors to end up on medical leave with a diagnosis of PTSD. If only.

Six months later, the voices have faded and the ghostly sightings are less frequent. The department still won't let Maggie return to the job. Oh, she's quit talking about ghosts, except to a few friends and the loony relatives who believe she's a witch, but Maggie doubts herself. Since inactivity is making it worse, she sets out to track down her shooter, only things get complicated...a ghostly witness wants his own murder solved, and sexy homicide cop, Josh Brandt—who just happens to be her replacement—wants her to butt out of his case.

After Josh catches her at the murder scene of a key witness, he wonders how the attractive redhead is staying one step ahead of him and how deeply her involvement goes. She doesn't appear as unstable as he's been told, but she's hiding something. He recognizes the signs...because he has secrets of his own. Unraveling her case soon draws them down twisted but intersecting paths.

And failure may cost Maggie her life.

Maggie’s gaze sharpened as the old crime scene routine fell into place. Discarded clothing near an old washing machine, empty beer cans. Hurst and his girlfriend hadn’t been especially tidy, but she’d seen worse. The kitchen was clutter-free except for an empty pizza box on the counter. Large. Smelled like pepperoni. The fridge contained three takeout cartons of leftovers—gumbo, red beans, something indefinable—a quart of milk, half used, and three beer cans in the plastic holder from a six-pack. Apparently no one cooked.

She entered the hallway. A check of the guest bedroom and a glance in the living room yielded nothing unusual, only the expected drawer or cushion out of place due to the police search.

The bodies were gone and the bed stripped. She knelt to look under the bed, but anything on the floor and nightstand had been bagged and removed to the lab. Otherwise, it was much as she remembered. Ten by ten, holding a full-size bed and one dresser. She moved across the room to check the closet…and heard a floorboard creak in the hallway.

Maggie froze, her heart hammering. Someone was in the house. She hadn’t been particularly silent, so they must know she was there. Why so quiet? She glided back to the door, the SIG Sauer already in her hand. When the hardwood floor emitted a second small sound, she whipped around the corner, pointing her gun at the intruder.

And faced the deadly end of a Beretta, held by a tall man with compelling, steel-blue eyes. The air vibrated with energy…and for one long moment, they stared at one another.

“Who are you?” she demanded.

“Police. And you?” The voice was cool, richly masculine.

She took in the dark blue jacket over a white shirt open at the collar, a loose tie slightly askew, and his black hair just long enough that an unruly strand curled over his forehead.

“Show me your badge.” She was stalling for time. Maggie didn’t doubt the confident, intense man on the other end of the gun was a cop. A very good-looking cop who wasn’t the least bit happy to find her there. How could she explain her presence?

He flipped open his jacket with one hand, revealing the badge clipped to his belt. “Detective Brandt. Now put down your gun and back away from it.”

He hadn’t raised his voice, but the or else was loud and clear. She nodded, slipped the safety on, and set the weapon on the floor, keeping her hands where he could see them.

“What are you doing in here?” he asked.

She figured he’d soon find out anyway, so she told him the truth—albeit a limited version. “Assessing the murder scene. The male victim was involved in my own shooting.”

The cop’s eyes narrowed, but the gun didn’t waver. “Should I know you?”

Ally Shields is a Midwestern writer with a love for mystery and the paranormal. Following a career in law and juvenile justice, she took up full-time writing in 2009. In 2012 her first paranormal was published, and she has two completed urban fantasy series. Ally loves to travel and includes many of those settings in her novels. Readers are welcome—and encouraged—to contact her through her website or track her down on Twitter. (@ShieldsAlly).