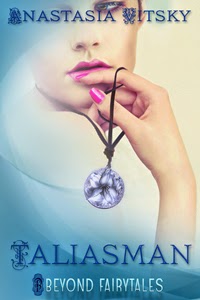 Will Talia accept love, or will she reject the one who offers her everything? @AnastasiaVitsky #BeyondFairytales http://amzn.to/10emqT0

Born to a destitute woodworker who wanted a son to carry on the family business, Talia grew up with one phrase on her lips: “If I had been born a boy.” If she had been born a boy, she would have been cherished, supported, and launched into the world with her father’s legacy. As only a worthless girl, she toils all day long to earn her handful of inferior grain.

Far away in the heavenly palace, Queen Vina receives a mysterious coin necklace from Nicodemus, teller of stories. Compelled by the throbbing heartbeat, she scours the earth to come across Talia, enslaved to a family who never wanted her. Rather than admit her motives, Vina purchases the girl with a sack full of gold. Furious, betrayed, and homesick, Talia endeavors to share her misery with the entire palace. Vina, afraid to confess her love, allows herself to become trapped in the role of brutal slave owner.

Talia, bred to expect nothing but misery, faces the first choice of her life. Will she accept love, even if it comes from an unlikely source? Or will she reject the one who offers her everything?

A Beyond Fairytales Adaptation of Our Lady’s Child

If I had been born a boy, I would have followed in my father’s footsteps to become a tradesman. Because I was a girl, he sold me instead.
“No,” Vina corrects me when I bring up the story, which is not often. She doesn’t like the facts, and I dislike her pretty lies. “Your mother agonized whether to let you go, but she knew you would be better off here. She wanted to give you a better life.”
I would call Vina on her mistruths, but she claims I still reason as a child. All of my protests to the contrary serve to prove her right, at least in her mind. Only when I agree with her does she admit I am a full-grown adult.
“You’re happy with me, aren’t you?” Vina makes me sit next to her at the formal dinners she hosts most nights, and she dresses me in rich silks with real lace. If I tell her “no,” she sends me to my room as punishment for my petulance. If I resist, she gives me one of her lessons in obedience. Some are painful, some pleasurable, and all serve to narrow my world and make me focus on her. How could I not, when she owns me?
“No,” Vina corrects me when I call her my owner. “I set you free, and I gave you the life you never could have had otherwise.”
When I turned nineteen, no one wanted to marry me. My mother fussed with my “hope chest,” if it could be called that, and arranged the one cotton handkerchief as if it could attract a suitor.
“Let me stay with you,” I entreated, and I won. I always did. The house needed new walls, and I wielded the power tools.
“You’ve turned her into such a tomboy no one will want her,” Mother chided Father, and the truth stung. I could have cared for my parents into their old age, but they wanted me gone.

Where to find out more about Anastasia Vitsky and her books:
Blog (Governing Ana)
Twitter: @AnastasiaVitsky
Facebook page
Authorgraph

From the first page I was hooked on Talia's story. "If only I had been a boy." As a young girl, I often felt that frustration watching boys playing on the playground and having a grand time. As a girl we are often placed into situations we would rather not be in and so in many ways is Talia. Sold to a wealthy woman, she resents her circumstance and longs to return to her parents, even though her heart burns at the memory of them selling her.

Day by day, Queen Vina tries to win the affection of Talia but she fights her at every turn. Spankings and punishments do not curb the girl's tongue and willful ways. It is only when the winds of fate are altered nearly irrevocably that love's true form is discovered when all hope is nearly lost.

This was a fast paced read that kept me up late and eagerly anticipating my breaks at work so I could revisit Talia and Vina. I wonder if they are accepting house guests...

She is too afraid to watch Dr. Who, but she adores The Good Wife and anything with Audrey Hepburn. In her next life, she will learn how to make the perfect pie crust.