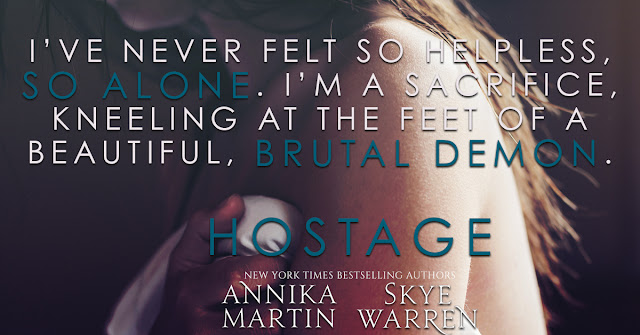 I never knew when he’d come to me. Only that he would.
I’d never even kissed a boy the night I met Stone. The night I saw him kill. The night he spared my life. That was only the beginning.
He turns up in my car again and again, dangerous and full of raw power. “Drive,” he tells me, and I have no choice. He’s a criminal with burning green eyes, invading my life and my dreams.
The police say he’s dangerously obsessed with me, but I’m the one who can’t stop thinking about him. Maybe it’s wrong to let him touch me. Maybe it’s wrong to touch him back. Maybe these twisted dates need to stop. Except he feels like the only real thing in my world of designer labels and mansions.
So I drive us under threat, until it’s hard to remember I don’t want to be there.
Until it’s too late to turn back.
HOSTAGE is a dangerous standalone romance by New York Times bestselling authors Skye Warren and Annika Martin. It’s set in the same world as PRISONER, but can read separately!
Pre-Order Exclusively on iBooks:
https://apple.co/2CwTHiV
Add to Goodreads: http://bit.ly/2Cf39V3

Posted by Erzabet Bishop at 9:24 AM