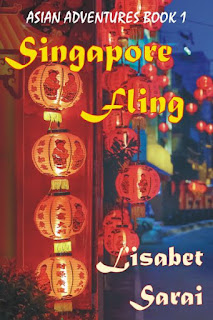 In the cleanest city in Asia, things can still get messy.

Thai entrepreneur Ploy Kaewkornwattanasakul has come to Singapore to close a deal. Ploy needs to convince tech whiz Jason Chow to license his ground-breaking innovation to her company on favorable terms. The future of her startup depends on her negotiating skill. When she meets Jason, though, she realizes she wants not just the invention, but the inventor, too.

Jason Chow is a brilliant engineer, a successful businessman and a bit of a rebel. He’s attracted to Ploy from the moment he sets eyes on her. However, he doesn’t dare respond to her advances, for fear she’ll discover his secret vice.

Ploy doesn’t understand why the sexy CEO has rejected her. She figures she’ll have to content herself with the cold comfort of a signed contract—unless the strength of Jason’s desire overwhelms his shame.

No sooner had Ploy pushed the dish away than a uniformed staff member rolled up next to her with a plastic bin of dirty utensils. It took no more than a few seconds for the employee to grab the bowl, balance it on top of a pile, wipe the table clean, and disappear.

Ploy glanced around the open space. Every table was full, most with multiple people, eating with single-minded determination. Clearly at the height of lunch hour, available tables were rare. Throughput was critical.

Probably she should vacate her table, but she didn’t like feeling pressured. Anyway, she’d just paid the equivalent of two hundred baht for a single bowl of not-very-exciting noodles. For that price, she could buy a full dinner in Bangkok. She had the right to sit here for a while.

She glanced around at the other customers in the busy, noisy hawker center, a mixture of shoppers and business people judging by their clothing. Most alternated between animated conversation and shoveling food into their mouths. Others sat glued to their phones, swiping away with one hand while manipulating chopsticks in the other. Everyone seemed to be in a hurry.

Three tables away, though, she noticed an anomaly: a solitary young man, reading a hard cover book. She couldn’t make out the title at that distance—it could have been in Chinese, for all she could tell—but whatever it was, it completely engrossed him. He was oblivious to the bustle around him, including the frequent accusatory looks he received from the cleaning staff.

A real, printed book! Ploy was surprised to see anyone his age opting for dead trees as opposed to a touch screen.

There was nothing remarkable about the man himself. A bit taller than average for a Singaporean, slender but not skinny, he had typical Chinese features. He wore the dark pants and white shirt, sleeves rolled up, that was the common business uniform in the steamy climate. His slightly shaggy black hair fell into his eyes as he bent over the book. A pair of dark-framed glasses and a phone rested on the table next to him.

Something about his utter stillness drew her, though. Attracted her, in fact. She found his focused concentration exciting. This was a man with a powerful will, a person who had no difficulty ignoring what did not concern him. A bit of a rebel, too, given his willingness to flaunt social convention in this aggressively polite city. Like her, he wasn’t about to bow to the unreasonable demands of his inferiors.

You’ll find information and excerpts from all Lisabet’s books on her website (http://www.lisabetsarai.com/books.html), along with more than fifty free stories and lots more. At her blog Beyond Romance (http://lisabetsarai.blogspot.com), she shares her philosophy and her news and hosts lots of other great authors. She’s also on Goodreads and finally, on Twitter.  Sign up for her VIP email list here:  https://btn.ymlp.com/xgjjhmhugmgh

Posted by Erzabet Bishop at 8:47 AM