One night can change everything…

The crew at Boston’s Brazen Head Pub hasn’t been very lucky in love. Can a mysterious visitor inspire them to look past old hurts and misconceptions and give romance a chance? One Lucky Night is a collection of five sexy interwoven novelettes by Aria Kane, Grace Teague, Ana Blaze, Constance Phillips, and Melinda Dozier.

Lucky Break by Aria Kane
Four years ago, chef Derek Chase walked out of Andrea Rivera’s life after a tragedy neither of them were prepared to deal with. When she’s called to the Brazen Head to repair a dishwasher, old sparks ignite buried feelings.

Lucky Star by Grace Teague
When her life is threatened by a mugger, Charlotte Price realizes she's in love with her best friend, Tommy Leung. The Brazen Head seems like the perfect neutral place to confess her feelings, but nothing goes according to plan.

A New Tune by Ana Blaze
When it comes to dating, Holly Hall has one unbreakable rule: no musicians. Not even gorgeous ones. Especially not gorgeous ones. Dating them only leads to heartbreak. So why did she let singer-songwriter Cian O’Neill kiss her? And why is she thinking about doing it again?

Lexi’s Chance by Constance Phillips
As a bartender, Sean Whelan meets all kinds of women every night, but none turn his head the way that Lexi has. She’s been playing cat and mouse with him for weeks. Tonight, Sean’s determined to get Lexi to quit teasing and take a real chance on him.

Drink or Dare by Melinda Dozier
A bachelorette party Drink or Dare game pairs paramedic students, Rachel Robertson and Killian Whelan, in a flirting match. Soon, the dares threaten to turn their academic rivalry into something much more.

Check out the book trailer! 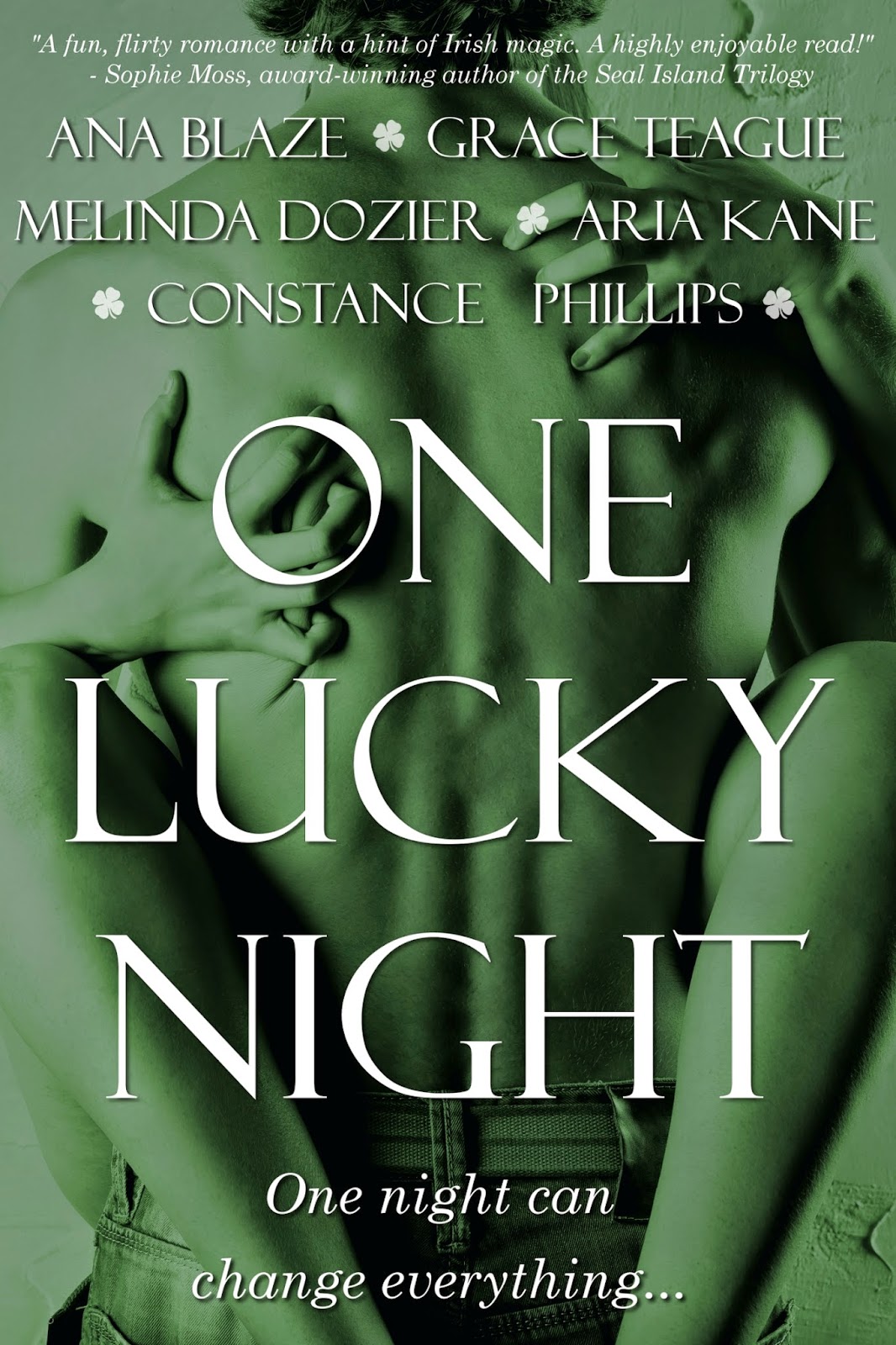 Holly chuckled, then scanned the room for another empty glass or any new customers. Her gaze landed on Cian, playing and singing to a growing crowd.

The man made her ex look like he was still playing in the minors, but Holly had seen enough to know that any girl with an ounce of wits and a desire to keep her heart from being shattered into a thousand pieces would stay away.

Kissing him had only proved what she already knew: musicians don’t make good boyfriends. Cian might as well wear a flashing red danger sign. He was too sexy and too slick to be taken seriously. And he kissed too well. Way, way too well. Her traitorous toes curled at the mere thought of his hot mouth covering hers, of the wall supporting her back while his long fingers gripped her waist and his leg slid between her knees. “Just a friendly New Year’s kiss,” he’d asked, catching her alone in the hall by the office, off-guard a few seconds before midnight.

She should have said no, but persistence and his puppy dog eyes wore her down. Holly leaned toward him a smidge, prepared for a quick peck and found herself in the midst of the most thorough kiss of her life.

After, still clinging to his shoulders and fighting to catch her breath, she’d tried to call foul. “Friends don’t kiss like that.” Her voice had trembled.

“No.” He’d grinned before rubbing his cheek against hers. “They don’t. Maybe something to think about while you keep me waiting.”

Cian had followed up with another kiss: quick and possessive and every bit as shocking as the first. Then he’d let go and walked away ... whistling.

She shot a glance in Cian’s direction. He was playing a song she didn’t recognize, something light and pretty that suited his smooth tenor voice. He looked up just in time to make eye contact, as though he knew exactly what she was thinking about. Her stomach tumbled. She was going to have to be more careful, avoid working on nights he played there. She could do that. Or she could move to another city. Maybe one on the other side of the continent. That might work.

Aria Kane is a recovering mechanical engineer and romance writer. As a military brat, she grew up all over the country, but now lives in sunny Florida with a 60 lb mutt who thinks he's a chihuahua.

Grace Teague lives in Pittsburgh with her spouse, children and a cat named Mr. Sushi.

Ana Blaze lives near Washington DC with her charming husband and three cats who firmly believe they are royalty. Ana is a member of Romance Writers of America.

Constance Phillips lives in Ohio with her husband, two ready-to-leave-the-nest children, and four canine kids. Her perfect fantasy vacation would involve hunting Dracula across Europe with her daughter, who also digs that kind of stuff.

Melinda Dozier teaches English to middle schoolers by day and writes at night. She lives in Guatemala, Central America with her college sweetheart and three sons.

The authors are giving away two Amazon Giftcards!


a Rafflecopter giveaway
Posted by Erzabet Bishop at 1:00 AM